skip to main | skip to sidebar

Protest Against This Act of Mindless Vandalism 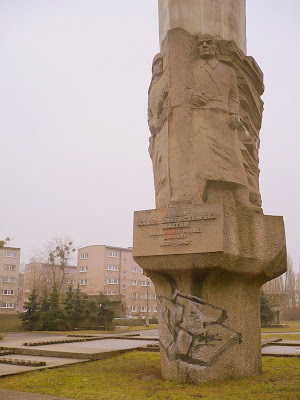 I would like to alert all readers of this blog to an unprecedented act of historical vandalism being prepared by the administration in the Polish city of Poznan.
Two weeks ago the councillors of Poznan decided to rid the town of the statue erected to commemorate the internationalism of General Karol Swierczewski. There is a simple reason - this General was a veteran of the International Brigades in Spain.Admittedly it is not the most beautiful of monuments, but it is the suppression of any memorial to the many Polish people who fought and died fighting fascism in Spain that I object to most strongly

The ruling centre-right Citizens Platform (PO) with the support of the rightist Law and Justice party, both essentially right wing parties, see the historic role of the International Brigades not as the first real challenge to the rise of fascism in Europe but rather as an expression of communist iniquity, and anything which places communists in the context of their undoubtedly heroic role in combatting fascism in Europe is loathed and feared.

But historical truth must prevail. Karol Swierczewski was born in 1897 in Warsaw, into a poor working class family. From the age of 12 he worked in a Warsaw factory. During the First World War, he was evacuated to Moscow. In 1918 he joined the Bolshevik Party and fought in the Russian Civil War as a soldier of the Red Army

During the Spanish Civil War, under the nom de guerre of General Walter, he commanded the XIV International Brigade, and later the 35th International Division. It is widely believed that Swierczewski/Walter was the inspiration for the figure of General Golz in Ernest Hemingway's 'For Whom the Bell Tolls'. 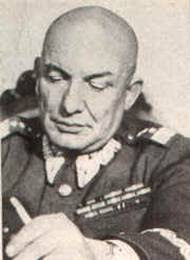 General Walter's (pictured right) estate was donated to the Association of Friends of the International Brigades. Last year, the University of Valencia exhibited 63, never before seen, images, selected from the 333 that make up the Swierczewski's/Walter archive.The case has been taken up, by the Polish Citizens’ Movement for the Defence of Monuments and Traditions of the Left, (CMDTL) with the Vice President of the European Parliament, Sr. Miguel Angel Martinez, who was jailed under Franco.

The CMDMTL struggle is very difficult in the present climate and needs international solidarity to help it prevent this act of political vandalism from taking place; such acts should have no place in modern Europe, which should cherish the heritage of anti-fascism not obliterate it

Direct representations be made to the following:

Ironically the removal of the Monument would cost 70,000 euros at a time when the Poznan Town Hall has decided to reduce the social spending budget by 21,000 euros.
Posted by Gabriel at 1:26 PM 75 comments:

No Return to Sectarian Bloodshed

Eugene McCartan General Secretary of the CPI analyses the situation facing the 6 Counties after the recent attacks by the so called 'Real IRA' and the 'Continuity IRA'... We reproduce the text of his recent article in the Morning Star since it says everything that we feel needs saying about this recent disturbing turn of events....

"The recent armed attacks by republican paramilitary groupings that killed two British soldiers and one member of the PSNI and injured a number of workers doing their job need to be condemned in the strongest possible terms.

This is a retreat into failed methods of struggle that the last 40 years have shown to be nothing but a cul de sac.

It is a barren strategy that will lead us nowhere except to further deaths, imprisonment, unnecessary suffering and division.

We appeal to the individuals and organisations that carried out these and other attacks to think again.

The recent mobilisation of working people by the Northern Ireland committee of the Irish Congress of Trade Unions in a number of cities and towns is to be welcomed as an important statement by working people that they do not want a return to violence, that the new political institutions set up under the Belfast Agreement must be made to work and that no group has the right to abrogate the will of the people.

The Communist Party of Ireland as an anti-imperialist party committed to securing national unity and sovereignty calls upon those forces that claim to act in the name of republicanism to stop these futile and counter-productive attacks.

We repudiate their approach as tactically and strategically futile and both anti-people and anti-republican.

While the condemnation of these armed attacks is important in itself, there is also a great responsibility on those forces that support the Belfast Agreement to push forward to secure its full implementation.

The Belfast Agreement and the institutions deriving from it are not the end of the process, nor the end of struggle, but rather they provide a forum from which new struggle and new demands must be made.

At this time it provides a better base towards which the people's demands and aspirations can be directed.

The alienation felt by many working-class youths needs to be addressed urgently in order to give hope and a belief that politics can deliver the much-needed change.

Progressive forces should consider the best way to allow young people to vent their frustration and articulate their demands in a meaningful and non-patronising forum.

Their natural anti-state instincts need to be harnessed into a real, coherent organised force to challenge the status quo on political grounds that unite working people rather than dividing them, to push forward the radical demands and solutions that are required.

“We don't have the control, so they get to make the decisions in their advantage”
There's a growing chorus of voices in the United States suggesting that temporary nationalisation may be best solution for the living dead, or 'zombie banks' among America's banks.


Listen to the interview with Professor Stiglitz here


The voices include Alan Greenspan, a former chairman of the Federal Reserve, and the Nobel prize-winning economist Joseph Stiglitz.

The argument goes that rather than drip-feeding public support to so-called 'zombie' banks, the government should take them over, clean up their balance sheets and sell them off.

It is not something the Obama administration wants to consider right now. After all, nationalisation is a dirty word for many free-market Americans.


But then what does it really mean - full state control, or partial ownership? After all, the US government already owns about 40% of Citigroup.

The US Treasury and the Federal Reserve dismiss the idea of nationalisation. But uncertainty about it is causing upset in the markets.

Business Daily's Lesley Curwen spoke to professor Joseph Stiglitz of Columbia University, who believes it is only a matter of time before nationalisation happens.
Posted by Gabriel at 7:55 AM 11 comments:

Drop a line to us here at 'Unrepentant Communist'...

A Fact Which Must Never Be Forgotten......

"Putin paid tribute to the veterans of all Allied nations, but emphasized that the greatest sacrifices of the war were paid by the citizens of the Soviet Union, who persevered despite the deaths of 27 million."

Who links to me?